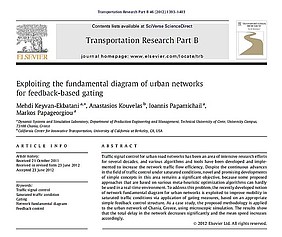 Traffic signal control for urban road networks has been an area of intensive research efforts for several decades, and various algorithms and tools have been developed and implemented to increase the network traffic flow efficiency. Despite the continuous advances in the field of traffic control under saturated conditions, novel and promising developments of simple concepts in this area remains a significant objective, because some proposed approaches that are based on various meta-heuristic optimization algorithms can hardly be used in a real-time environment. To address this problem, the recently developed notion of network fundamental diagram for urban networks is exploited to improve mobility in saturated traffic conditions via application of gating measures, based on an appropriate simple feedback control structure. As a case study, the proposed methodology is applied to the urban network of Chania, Greece, using microscopic simulation. The results show that the total delay in the network decreases significantly and the mean speed increases accordingly.