from the International Society on Multiple Criteria Decision Making (MCDM) 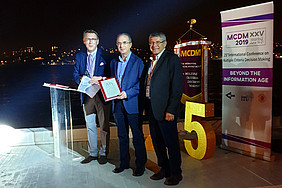 Professor Michalis Doumpos received with the Gold Medal award of the International Society on Multiple Criteria Decision Making (MCDM), during the 25th Conference of the Society that was held in Istanbul, Turkey, during June 16-21, 2019.

The MCDM Gold Medal is the highest honor that the International Society on MCDM bestows upon a scholar who, over a distinguished career, has markedly contributed to the theory, methodology, practice and professional development of MCDM. Since its establishment in 1992, 16 scholars have received this distinction. Professor Doumpos is the second Greek researcher to receive this award.