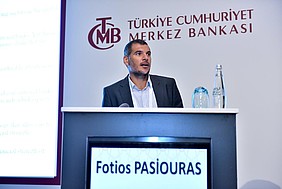 Fotios Pasiouras, Associate Professor at the School of Production Engineering and Management and member of the Financial Engineering Laboratory at the Technical University of Crete was ranked in the top 4% authors - researchers in economics in the world based on his publications over the last decade.

More precisely, according to the most recent ranking (January 2017) of the bibliographic database IDEAS/RePEc he was included in the top 4% of the list “Top 10% Authors – Last 10 years publications”. This ranking was the outcome of the evaluation of a total of 49,208 registered authors in economics from around the world based on number of research/academic criteria relative to their publication record over the last ten years (number of citations, Wu-index, H-index, Number of Distinct Works Weighted by Recursive Impact Factor, Downloads, etc.)

According to Google Scholar his work has received over 4,000 citations and it has an h-index of 31 (February 2017).