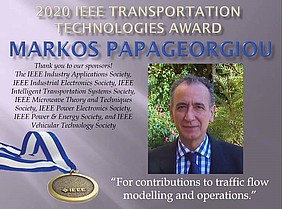 Professor Markos Papageorgiou was awarded the 2020 IEEE Transportation Technologies Award, for contributions to traffic flowing modelling and operations, by the Institute of Electrical and Electronics Engineers (IEEE), during a virtual event, on September 21, 2020.

During his speech professor Papagorgiou deeply thanked his nominator, professor Petros Ioannou, a holder of the same Award and the Board of IEEE-ITSS, in particular professor Miguel Ángel Sotelo and professor Cristina Olaverri Monreal, for their leadership and support.

Quoting verses from a poem by the German poet Bertolt Brecht [1] and commenting that "We are praising big names in history, but they would have done nothing without the hard work of many others; and it is similar in science", Professor Papageorgiou concluded his speech by saying : «I am receiving today this prestigious award for work conducted with many undergraduate and graduate students, collaborators and colleagues; and I would like to thank them all, as a big part of this award is actually theirs».

The IEEE Transportation Technologies Award was established in 2011 and is presented to an individual, a team, or multiple recipients up to three in number, recognizing advances in technologies within the fields of interest to the IEEE as applied in transportation systems. The award consists of a bronze medal, certificate, and cash honorarium.

[1]
“… Young Alexander conquered India.
He alone?
Caesar beat the Gauls.
Was there not even a cook in his army? …”

Bertolt Brecht, Questions From a Worker Who Reads, [1935]