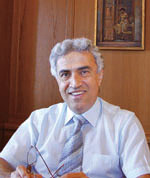 Yannis A. Phillis, Emeritus Professor and former Rector at the Technical University of Crete, was elected as a fellow of the European Academy of Sciences EurASc. The academy is a non-profit non-governmental, independent organization and a fully independent international association of distinguished scholars that aims to recognise and elect to its membership the best European scientists with a vision for Europe as a whole, transcending national borders both in elections and in actions, and with the aims of strengthening European science and scientific cooperation and of utilising the expertise of its members in advising other European bodies in the betterment of European research, technological application and social development.